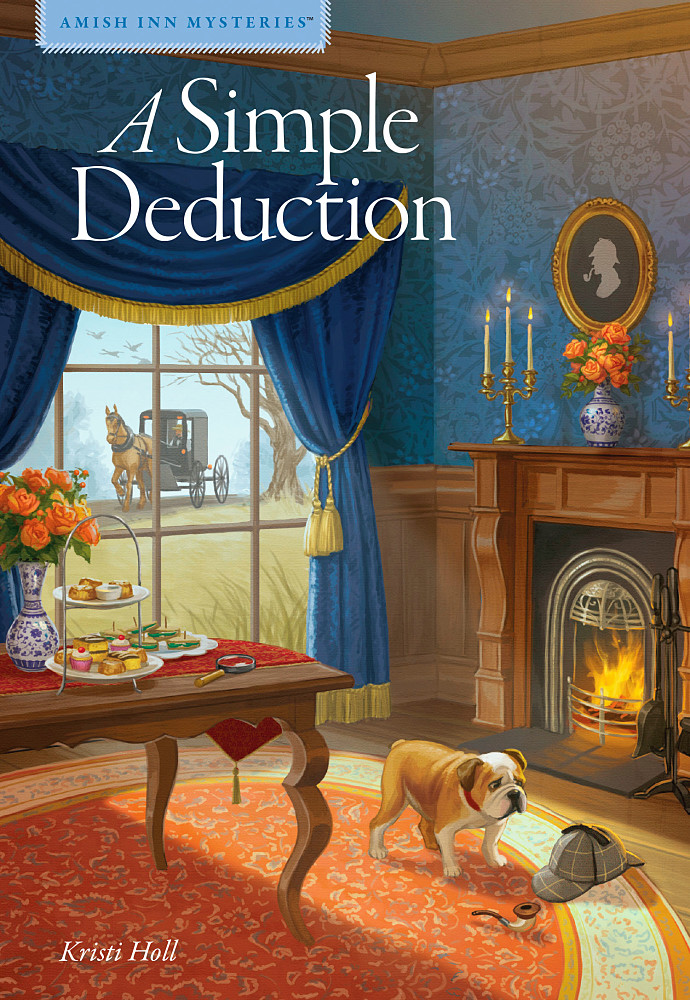 Subscribe to this club
Liz Eckardt, owner of the Olde Mansion Inn bed-and-breakfast in Indiana's Amish country, is offering something new: a Sherlock-Holmes-inspired weekend complete with Victorian treats she baked on her own street and a mystery to solve. With all the hard work she's put in to prepare, the affair should be a study in simple -- until Liz deduces that something decidedly illogical is going on.

As part of the fun, Liz has enlisted the help of an amateur magician to pickpocket the participants then give the items to Liz for safekeeping. But when more possessions start disappearing, even though her visitors surely locked their doors, Liz can't help but wonder if her friend has embarked on a real life of crime. Is he the mastermind behind the thefts?
Yet there are other suspects to be eliminated. A dotty woman and her doting daughter may be the dears stalking other guests. A writer who hasn't sold a book in years has more motive than most. A chatty actress who claims she wants to shadow Liz for an upcoming role as an innkeeper could be guilty, but will she pipe down long enough for Liz to hear the truth? And what about the portly, pizza-loving patron whose purpose for being in town is cloaked in mystery? What's on his plate may turn out to be anything but elementary.

Liz will need all the assistance she can get from her sidekicks the Material Girls and her brave bulldog, Beans, if she's to reason out what game's afoot in Pleasant Creek. Can she restore justice to her Home Sweet Holmes ... or will this be her final problem?

Liz always loved and admired her mother, Abigail. She was an amazing, hard-working woman and role model. It is no surprise Liz inherited Abigail's determination and strong work ethic, earning Liz a successful career as one of Boston's most prominent attorneys. But even so, at 40 and with Abigail's recent death, Liz is running on empty.

When she inherits an old diary from Abigail's childhood after her mother's passing, Liz is stunned to read about the life Abigail had growing up in an Amish community. She'd never mentioned any of it to Liz. Ever. Why would her mother keep such a big secret?

Determined to find out what caused Abigail to abandon her Amish life at the age of seventeen, Liz leaves Boston and moves to her mother's hometown of Pleasant Creek, Ind. While she settles into the quaint and friendly community as the new owner of the Olde Mansion Inn, Liz is careful to keep her connection to the Amish a secret ... at least for now.

Will Liz's journey bring her the answers she longs for about her mysterious heritage ... or send her straight into harm's way?

Liz didn't realize when she bought the inn that she was also "inheriting" the resident lazy-yet-lovable English bulldog, Beans. She doesn't have the heart to give him away, so she adopts him into her new life. Although he spends most of his time sleeping by the front door, Beans still manages to get mixed up in the mysteries of Pleasant Creek.

Known for her delicious home-baked apple pies and impressive quilting skills, Mary Ann is one of Pleasant Creek's most loved citizens. She is also the proud co-owner of Sew Welcome, the fabric shop located on the first floor of the Olde Mansion Inn. Having lived in Pleasant Creek all her life, can Mary Ann help Liz learn more about their Amish neighbors and track down the true identity of her mysterious family?

An accomplished and sometimes wildly creative quilter, Sadie co-owns Sew Welcome with Mary Ann. Shrewd, and salty-tongued, 70-year-old Sadie says exactly what she thinks, which sometimes lands her in hot water. Sadie takes a liking to Liz right away, often treating Liz like one of her own children. With a bit of a reputation for being a busybody, Sadie always seems to know everything going on in Pleasant Creek. It's nearly impossible to keep a secret around her, but Liz must be careful not to reveal her real reason for coming to Pleasant Creek until the time is right.

Jackson is the handsome mayor of Pleasant Creek who also owns Cross Furniture Co., a local business that employs many of the Amish men in the area to help handcraft high-end wood furniture. Jackson is well-liked in the community and stays very involved in everything that goes on in town. From the moment they meet, he is attracted to Liz, but senses there is more to her than meets the eye.

“
Hard to put the book down!
Vicki, Oregon
“
What an exciting series! I love the quilt squares, too.
Kathy, Maryland
“
I just love all your series stories. They are a great read.
Patricia, Mississippi
“
Excellent characters and storyline. Cannot wait for the next one!
Shelagh, UK

Thank you for your interest in A Simple Deduction