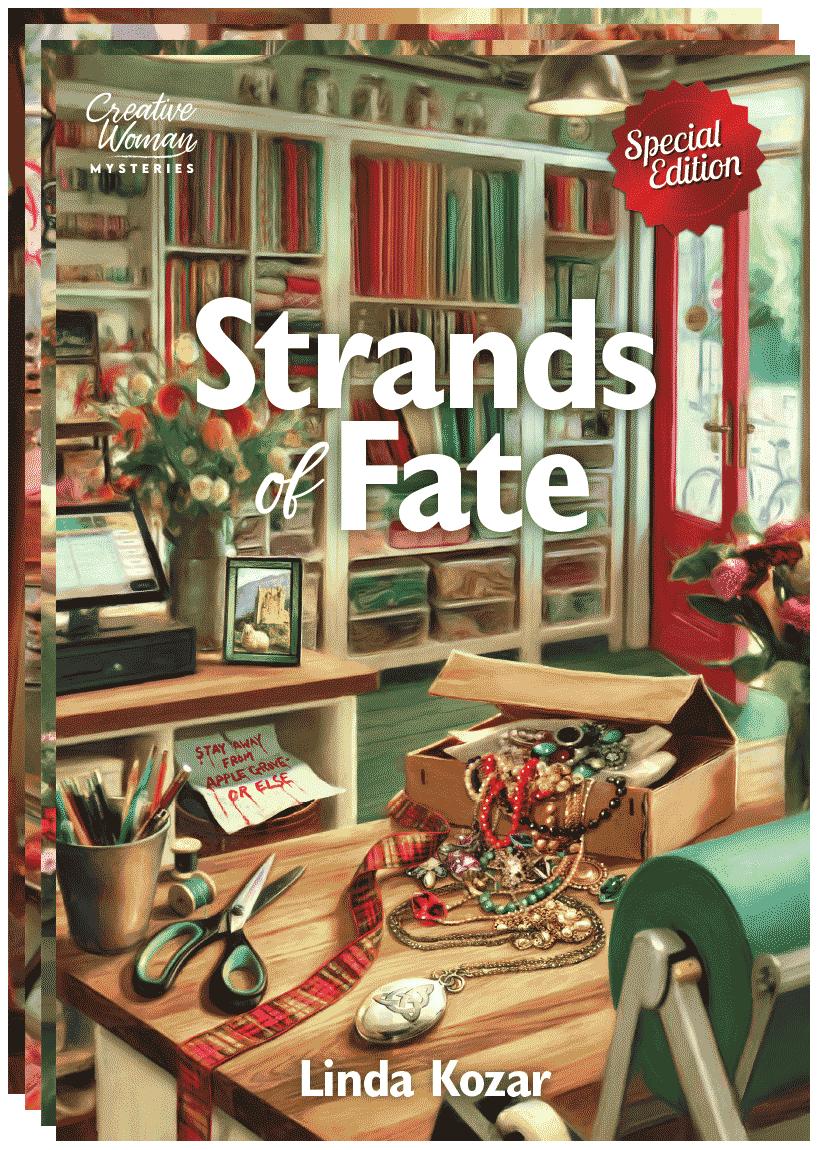 13 books in this Club

Each book in this Special 10th Anniversary release includes a commemorative cover and BONUS craft projects inspired by items in the stories to bring you even more hours of enjoyment!

We can hardly believe that 10 years have gone by since we introduced one of our favorite mystery book club series. Our editors were so excited to combine the two best characteristics of Annie’s--cozy fiction and quality crafting. Over the years we have been thrilled to watch fans grow to love this heartfelt series as much as we do. You can discover the adventure and excitement yourself with this special-edition collection.

Designed for creative women just like you, you'll be sitting on the edge of your seat from the very first page of Strands of Fate, the first book in the Creative Woman Mysteries Club. Join us for intrigue... adventure... danger... and romance. This new club has everything you demand in a good mystery, including memorable characters, some of whom you'll love, and others that you may love to hate!

These gripping mystery books will lead you on an adventure spanning 10,000 miles from the quaint village of Wainscott, Scotland to the charming little town of Apple Grove, Oregon. Follow Shannon McClain as she unravels the truth behind a missing fortune in jewels and her mother's disappearance, all those years ago.

Strands of Fate will introduce you to Shannon McClain, who has been in mourning since the tragic death of her husband three years ago. With two children to raise and her money running out, she receives a mysterious letter from the United States, informing her she has just two weeks to claim a large inheritance -- part of which is a fortune in jewels that can only be found by solving cryptic clues stitched in a needlepoint by her late grandmother. But she is blindsided when she meets an aunt and uncle she never knew existed, who are most unhappy she has arrived.

You'll share Shannon's fear and excitement as she uses the last of her late husband's insurance money to travel with her best friend Coleen from their small village in Scotland to a quaint town in the northwestern United States. But right before they are to leave, she finds a threatening note nailed to her door -- written in red ink, dripping like blood.

"Stay away from Apple Grove... or else," it warns.

Alec has his father's calm, thoughtful nature. He is a good son and very supportive of his mother's quest to learn the truth about her past. When he's not out with his friends, or studying for his classes, he enjoys fishing, something his father taught him to do years earlier.

Deborah was Shannon's grandmother's cook and confidant for more than 30 years. She becomes a comforting presence in Shannon's life, helping her adjust to life in America. Deborah is thrilled that Shannon has inherited the crafts mall. An avid quilter herself, she and Shannon find much to talk about.

Lara has inherited her mother's flashpoint temper. But she also inherited her mother's creative talents and is an expert crocheter. Lara possesses a rare talent for noticing things others miss -- seen as well as unseen. This makes her a great asset to her mother throughout the series as Shannon is drawn into the mysteries of Apple Grove.

A striking and personable 42-year-old, Michael is 6 feet 2 inches, with straight black hair and striking blue eyes. He owns an elite security consulting firm with many long-reaching connections to nearly all levels of industry and politics. He is strongly attracted to Shannon from the moment he meets her, but unwilling to reveal his secrets, which raises a barrier between them. Death has followed people he's loved, having lost his wife as a result of his dangerous career -- and he is unwilling to trust his heart again. This will change with Shannon, though he tries to hold her at a distance for a long time.

Morgan is the manager of the craft market and quite the expert at card making and stamping. She is most unhappy to have Shannon on the scene as her new boss but she hides it well. What dark secret lurks behind her friendly facade?

Shannon is an avid beader -- running her own custom jewelry business. She thrives on expressing her talents through her one-of-a-kind creations. She is headstrong and can be stubborn at times. But she's best known for her sensitivity to the feelings and needs of others, and for her beautiful smile. Widowed at only 37, she draws strength and inspiration from her two teenage children, but worries about their future. She knows she needs to move on with her life... but she never expected anything like this mysterious inheritance!